I found some great Scripture printables this morning you can print and frame at Katie’s  Terpblog. While I was there her PROJECT PURGE image caught my eye. What a great idea! Katie and Theresa had a goal to help Manasseh Project (outreach ministry of Wedgwood Christian Services dedicated to ending the sexual exploitation of young men and women in West Michigan) with a garage sale and came up with Project Purge. 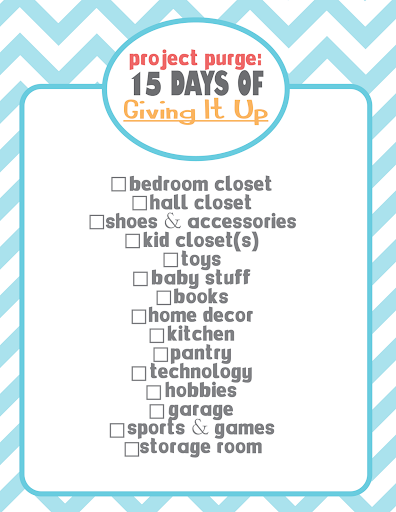 I’ve been on my own Project Purge for since January. I’ve already sold and gave away thousands of books.

I had to stop purging for surgery and recovery but I still try to ship 50 books or so a week to Amazon (see them here). I have big plans to purge the rest of the house by this spring.

Do You Need to Purge?

I’d love to have accountability partners and do the 15 day purge before the end of the year. Anyone interested? It would be super to do major purging before the holidays. If  you might be interested, leave a comment.

If a few of us commit  to a goal date we can share via blogs and Facebook. My Grandmother always said, “Many hands make light work.” We can’t help each other physically across the miles but we can encourage one another to purge five spaces a week for three weeks.

If we start Mon the 11 we could finish before Thanksgiving November 28.

7: An Experimental Mutiny Against Excess

7 is the true story of how Jen (along with her husband and her children to varying degrees) took seven months, identified seven areas of excess, and made seven simple choices to fight back against the modern-day diseases of greed, materialism, and overindulgence.

Watch a video here
Food. Clothes. Spending. Media. Possessions. Waste. Stress. They would spend thirty days on each topic, boiling it down to the number seven. Only eat seven foods, wear seven articles of clothing, and spend money in seven places. Eliminate use of seven media types, give away seven things each day for one month, adopt seven green habits, and observe “seven sacred pauses.” So, what’s the payoff from living a deeply reduced life? It’s the discovery of a greatly increased God—a call toward Christ-like simplicity and generosity that transcends social experiment to become a radically better existence.